A joint working group composed of members representing citizens of the Tla’amin Nation and residents of the City of Powell River was formed in late November, 2021 to help guide this conversation. This working group was formed to honour the Community Accord for working through issues that impact both the Nation and the city.

John Hackett is fortunate to be born and raised within Tla’amin Territory and reside in T’ishosum community.

He attended Nicola Valley Institute of Technology from 2002 - 2004 to complete the Natural Resource Technology Diploma Program. Upon completion he joined Sliammon Treaty Society to develop the Tla’amin Wildlife Harvest Plan to support Tla’amin’s Land and Water Use Plan. With this opportunity he observed hands-on negotiations between Tla’amin Nation and the Provincial and Federal Governments.

In 2006 he transitioned to the Tla’amin Forestry Department to manage the Nation’s woodlot and in 2006 he was elected to Council for our Nation. He held this seat for 14 years till 2020, where I was elected as Hegus of Tla’amin Nation. 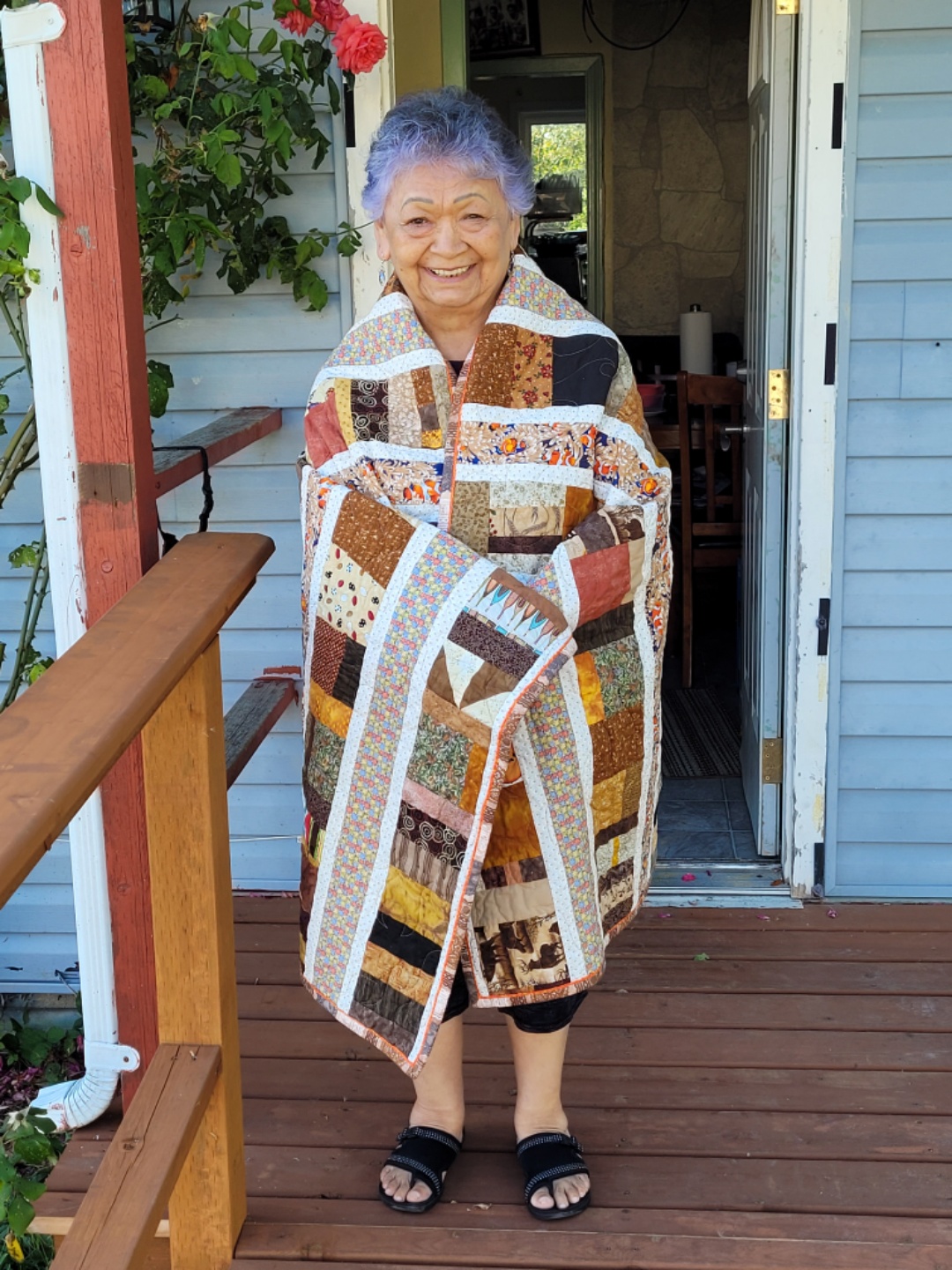 Doreen’s traditional name is Les.Pet. Her parents were Jimmy George Harry and Elizabeth Harry (Hackett). She is the granddaughter of Hereditary Chief George Harry from Church House, BC and his wife Theresa Harry (Bob). Her mother’s dad was Johnny Hackett and wife Agnes Hackett (Bob).

Doreen worked as a teacher’s aide in Powell River for 15 years. Through the mid 1980s to the early 2000s, Doreen worked in Vancouver at Planet Bingo and attended Native Education Centre (1994 - 1995) to learn computers. Upon graduation she worked at the Social Planning and Research Council (SPARC) of BC. During this time, she and her husband were also the first Aboriginal Foster Parents in the province, and fostered children for approximately 20 years and adopted four of those children.

In 1999, Doreen was one of six women (with 125 combined years as foster parents) who founded the Federation of Aboriginal Foster Parents, and she remained their treasurer for 20 years.

Erik Blaney is a born and raised Tla'amin Nation citizen who has been very active in his culture while growing up where his ancestors have lived since time immemorial. Erik is currently on the Executive Council for the Nation and holds the portfolio for the Lands and Resources Department fitting his background in Natural Resource Management and passion for protecting his ancestral territory. Most people locally know Erik for his many cultural appearances throughout the local community from Kathaumixw and Blackberry Festival to the openings at Sea fair and the annual Cultural Days at Ay'jumish (Willingdon Beach). Growing up Erik's traditional name given to him was "Menathey" which meant drum keeper and gave Erik the role of keeping the culture for the Nation alive through song. Being part of the joint working group is an honor for Erik, and as a cultural leader in the region it is vital to tie connection to land, with the connection to the people on the land and bring forward Tla'amin history and culture to the important conversation happening at the table. 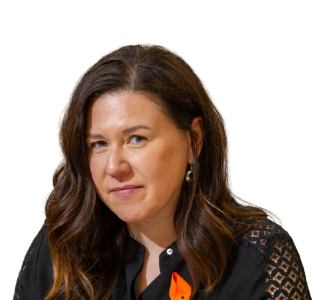 Harmony is of Tla’amin First Nation ancestry and was raised in Tla’amin territory. Harmony operates a consulting business providing strategy and advisory services in Indigenous health, governance, and human rights, as well as teaches on these same matters. She also currently serves as Vice-President, Indigenous Wellness & Reconciliation with Providence Health Care, and has previously served in senior roles with the In Plain Sight review in BC health care, and with the First Nations Health Authority, First Nations Summit, and First Nations Forestry Council. Harmony has a BA from Simon Fraser University and an MHA from the University of British Columbia. 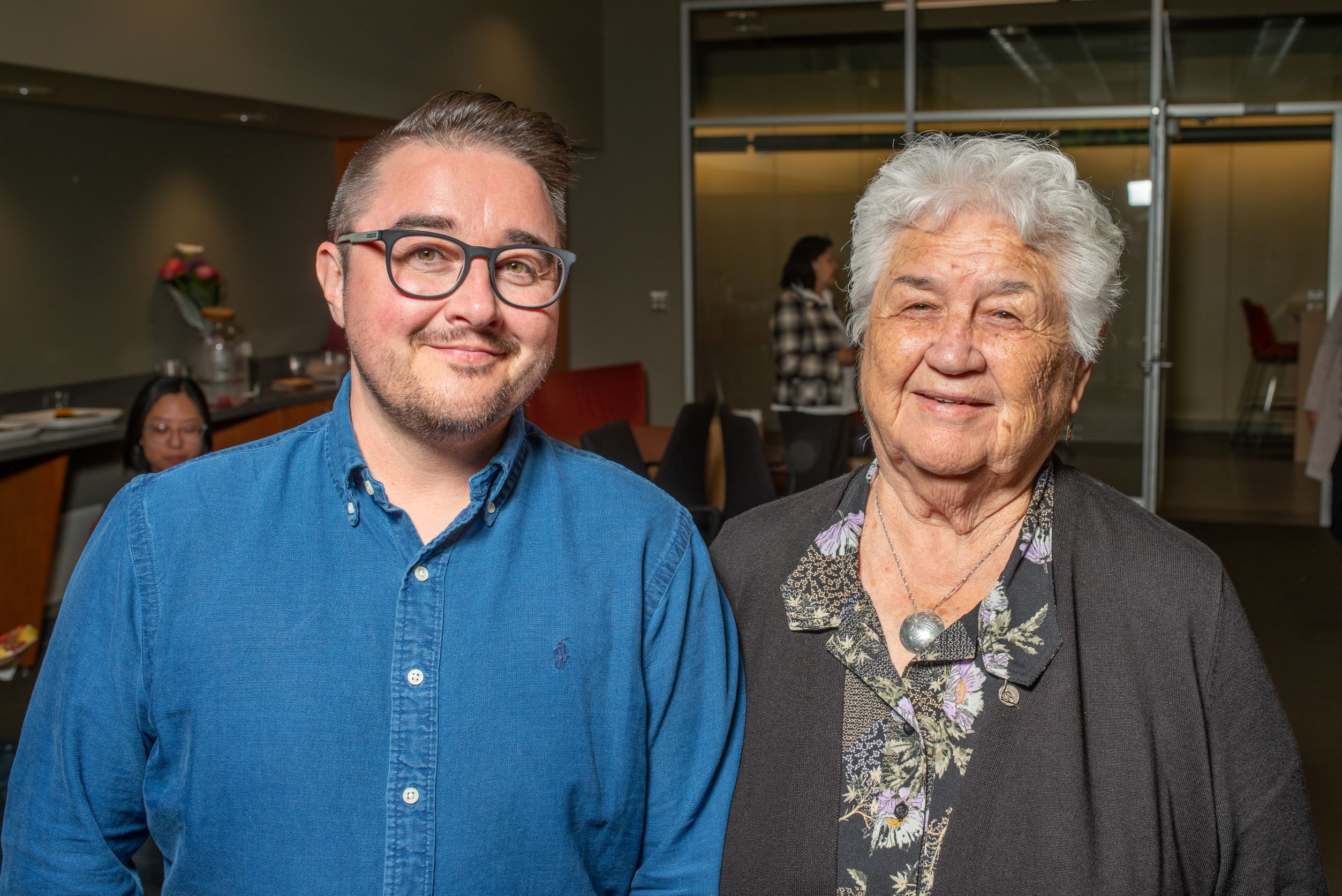 Davis is from Tla’amin Nation where his first communications job was as editor of the Neh Motl newspaper. Today he operates Toxw oxw (Becoming Clear) Communications and brings 18 years of progressive experience in communications and public relations for Indigenous organizations and First Nation communities. Davis most recently established the communications program for the First Nations Health Authority. He holds a Masters of Communication Management from McMaster and Syracuse Universities and is the co-author of the UBC Press digital book As I Remember it about his grandmother Elsie Paul. 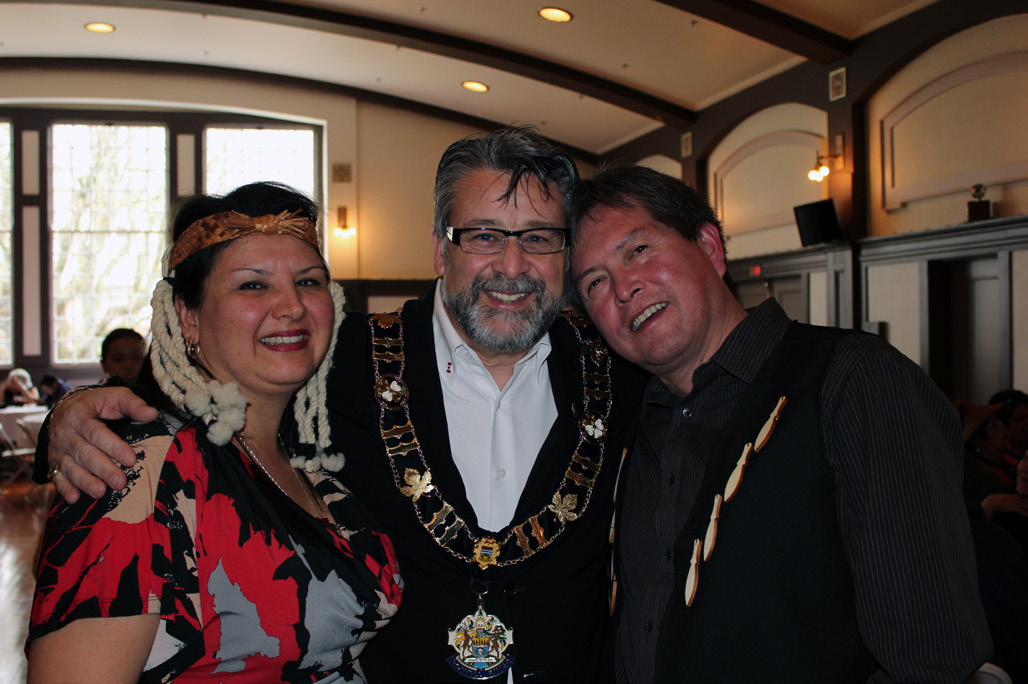 Mayor David Formosa was born and raised in Powell River and he and his wife, Laurie, have four children and four grandchildren, all living here.

Dave is an award-winning entrepreneur and most of his current business activity is centered on retail, transportation, real estate development, marinas, and the hospitality industry, all within the Powell River region.

In 2013, he was awarded the Queen Elizabeth II Diamond Jubilee medal to honour his significant contributions and achievements to the community. 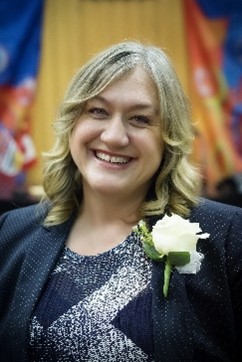 Since 2007 Cindy Elliott has called Powell River home. She’s enjoyed a career that included Economic Development and Indigenous Relations with both the BC and Alberta provincial governments.

Currently, Cindy works for her family’s business in Lund as a boatlift operator during the spring through fall of each year. She is proud to call herself mother of five, grandmother of four and enjoys being part of a large family. Some of her hobbies include curling, camping, boating and coffee conversations with friends and associates. Cindy is a strong advocate for children with disabilities and a fan of music and the arts.

Her civic portfolios include: Arts, Culture and Heritage, Social Action and Planning, Affordable Housing and is the Council appointee to the Community Advisory Group to Western Stillwater & Island Timberlands and Community Futures Development Corporation. 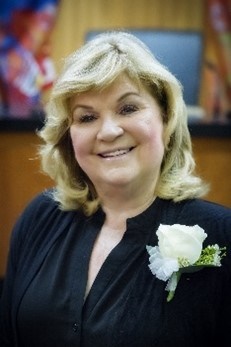 recently retired from her position as Constituency Assistant to our MLA, a position she held for 13 years. Maggie studied Law, Business Administration and Social Work at the University of Victoria and spent many years as a paralegal with Legal Aid and before that she was employed by the City of Powell River in Administration and then the Fire Department.

She currently sits as Chair of the Board for the Source Club Society, is Chair of the City’s Housing Roundtable and represents the City on the Community Action Team, which is a Vancouver Coastal Health-funded organization working on the current opioid crisis. Maggie’s other community service posts includes past board positions with Legal Services Society of BC, The Powell River Golf Course Board, Sunset Homes Society and Tourism Powell River.

She is an avid golfer and curler and enjoys spending time at her home in Palm Desert. 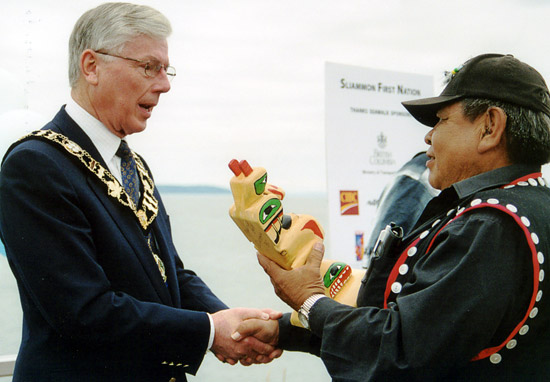 Stewart was born in Powell River, attended UBC and upon graduation was commissioned as an officer in the Royal Canadian Navy serving at sea and ashore. He was named to the Order of Military Merit as an Officer. He is a graduate of the National Defence College of Canada. Stewart also worked as a teacher in Victoria, BC, Sydney, Australia and London, England.

Stewart joined his late publisher father, Al Alsgard, as assistant general manager of the Powell River News, was publisher of the Sechelt Peninsula Times and owner of Books & Stationery.

In service of the Powell River community, Stewart held posts as founding chair of Powell River Community Futures, President of the Chamber of Commerce and later successfully ran for Mayor, serving 12 years. As Mayor, Stewart led the City in the Community Accord agreement with the Tla’amin Nation.

Stewart is interested in continuing to give back to this community and is honoured to be part of this work with residents of the City and citizens of the Tla’amin Nation. 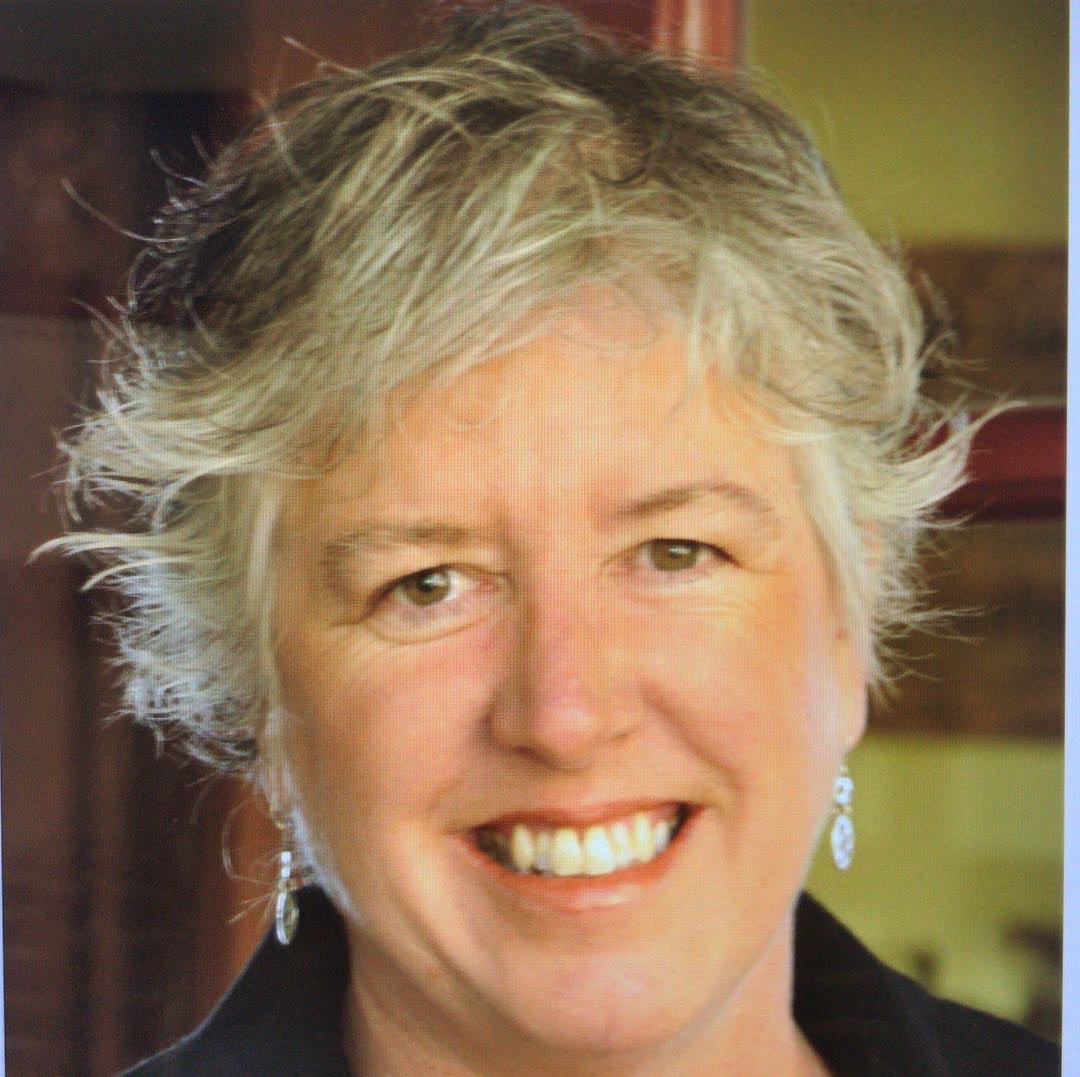 Lyn moved to town 21 years ago to manage Career Link (now the Work BC Centre) and then moved on to become the Executive Director of the PREP Society (now LIFT Community Services), finishing her career as a local real estate agent. Having the opportunity to meet many people from this place, from all walks of life, she learned that like her, people love this city, its people, and the tremendous arts, culture and beauty this area has to offer. Lyn hopes to use the skills garnered from her past work, and her Master of Arts degree in leadership, to help enable inclusive conversations about the future of this place we all call home.

Trina grew up in Salmon Arm, BC, and chose Powell River as her home over five years ago. Her favourite things about this place are the natural beauty, opportunities to meet friendly people, and the sunsets. Trina has spent the last 12 years as a facilitator and designer, helping community leaders with strategic and difficult conversations. Since coming to town she’s been involved as a volunteer with the Knuckleheads Winter Recreation Association, Powell River Garden Club, Texada Island Nonprofit Seniors Housing Association, and is on the board of Powell River Community Foundation.

Lisa was born in St. John’s, Newfoundland. She fell in love with this place after honeymooning here in 2014. With her husband, she relocated from Vancouver in 2020. Getting outdoors with her rescue dog, swimming, cycling and exploring supporting the Patricia Theatre are things she enjoys about this place. With a 20 year career as a community planner and facilitator, Lisa supports communities through challenging conversations and decisions. She looks forward to working with residents of the city, citizens and Council of the Tla’amin Nation, members of the Joint Working Group and City Council to help make an informed decision as part of this work.