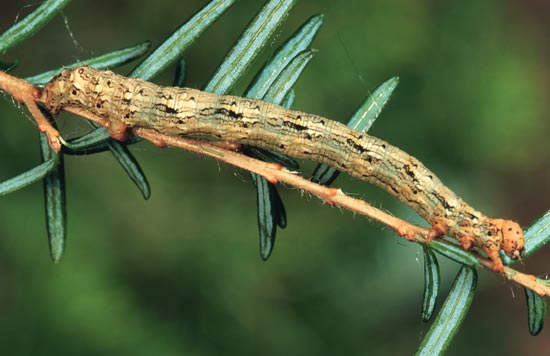 An outbreak of Western Hemlock Looper moths is occurring throughout Powell River. The infestation can result in damage to trees and forested areas.

We are in the third year of the outbreak and the impact has worsened this year due to current drought conditions. Significant needle drop, caused by the moths feeding on trees, is occurring throughout the city and adjacent forests. We expect it to be particularly visible in Millennium and potentially Penticton parks.

Fire Risk: Needles from coniferous trees are an extremely dangerous fuel for fire and easy to ignite. Campfires are banned in the City and throughout the province. Please be extra cautious.

What is the Western Hemlock Looper moth?

How long will the outbreak last?

While outbreaks are not uncommon and populations build every 11 – 15 years in our region, the moth populations could diminish next year, or we may see another year of defoliation next summer. This depends on weather and other environmental factors.

Can we control the outbreak?

There are no measures we’re prepared to take at this time. Traditionally here on the coast, best practice is to let the outbreak naturally run its course, usually within three years. The only known treatment is to use a bacterium naturally found in the soil. It is grown and applied in a more concentrated form.

Which trees are being damaged?

The moths primarily feed on Western Hemlock trees, but also feed on other hosts including Fir and Spruce when populations are high.

Will the trees die?

Some trees that are less tolerant of being defoliated, Western Hemlock in particular, may succumb to the damage.

Are the dead trees a hazard?

Not immediately, as generally the trees were healthy prior to being defoliated and dying. It will require years of decay before trees become structurally weaker.

Trees that have pre-existing major structural defects and decay, on case by case bases, may have to be removed sooner if there is a nearby target at risk.

What is the impact to forest health?

The killing or removal of these susceptible trees is an important component of ecosystem dynamics and essential in recharging ecosystems by allowing younger trees to emerge, while supporting the recycling of nutrients. This is a natural and important process.

What can we do to help?

There is not a lot we can do to control the situation. We do ask that you have patience while the outbreak completes its natural cycle and see whether defoliated trees recover their health.